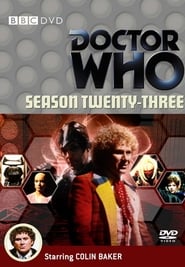 The Trial of a Time Lord is a 14-part British science fiction serial of the long-running BBC series Doctor Who. The serial, produced as the twenty-third season of the Doctor Who television series, aired in weekly episodes from 6 September to 6 December 1986. The only Doctor Who presentation of its kind, it contains four mini-adventures, The Mysterious Planet, Mindwarp, Terror of the Vervoids and ended with Colin Baker’s final story The Ultimate Foe.

The idea for the serial stemmed from several production changes to Doctor Who, such as reduced screen time for the season and a request from BBC controller Michael Grade that the series contain less violence and more humour. Several problems occurred during production, including the death of scriptwriter Robert Holmes, and the resignation of script editor Eric Saward.